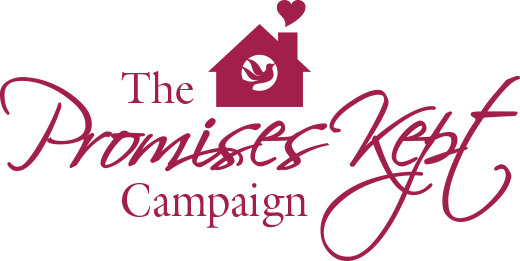 The Promises Kept Campaign is a multi-phase campaign dedicated to raising funds for special projects at Redstone. It was initially launched in 2008.

What has the Campaign raised so far and how has that money been used?

Phase I raised approximately $1.6 million in support for the Benevolent Care Endowment Fund. This permanently restricted endowment as a legacy that will provide perpetual support to help meet the Benevolent Care needs at Redstone. An additional $700,000 was raised and used for renovations to the Harbor Skilled Nursing Center. Projects have included renovations to the reception area, modernization and improvements to the residents’ beauty salon, construction of a new fitness center for additional rehab and wellness opportunities, and the construction of a new bistro. These spaces will be enjoyed by residents, their families, visitors, staff, and the general public.

What are the plans for Phase II?

Phase II will raise funds to build a new Admissions and Discharge Elevator Tower that will be constructed in the back of the Harbor (Skilled Nursing and Rehabilitation Center.) We are nearing our goal of $600,000. In addition, we will secure new commitments of Legacy Gifts for Redstone endowment funds.

What is the importance of the Admissions and Discharge Elevator Tower in the Harbor?

The lack of a dedicated admission and discharge area in the Harbor has been a known problem at Redstone for many years. During the 35 years of the facility’s existence, residents have shared one thing in common – all have been admitted and discharged through the front doors in the main lobby of the facility. This is both a logistic and dignity issue for Redstone’s residents and their families.

For those being admitted to the Harbor, arriving through the front lobby increases the anxiety that is experienced. The improvements related to Phase I (especially the bistro) will only increase the activity in the lobby area. The parking of ambulances in the front entrance area for admissions and discharges creates challenging safety conditions in the driveway. The greatest concern is the dignity issue related to those who have passed away and whose bodies are being removed by funeral directors. These must also be transported through the front lobby.

Redstone wants to create a private location that will provide peace, comfort, and hospitality for those who are being admitted, while also giving appropriate dignity to those who have passed away. Therefore, the construction of the new elevator tower is critically important as we move forward with improvements to the Harbor.

Why doesn’t Redstone just build the tower with operating dollars?

The Harbor is at the heart of Redstone’s mission as a charitable organization. Redstone receives only 60 cents reimbursement per dollar spent on caring for the needy residents of this facility. Therefore, operating funds for improvements to the Harbor are very limited. Redstone must turn to the larger community to help fund these improvements.

How can I participate?

Redstone is inviting those who share a vision for hospitality and dignity in the Harbor, including those from the larger community, to become “shareholders” in this project. We are looking for those who are willing to sponsor a “share” of $1,000. An individual may choose to sponsor one or more shares. If a share is beyond one’s reach, they may wish to partner with one or more friends or family members to form a sponsorship team. Organizations, churches, and businesses will also be welcome as shareholders for hospitality and dignity in the Harbor at Redstone.

Gifts of all sizes, large and small, are welcome and encouraged! Together we will fund the shares of hospitality and dignity that are needed for this project.

Make a Donation
Go to Top