Unique and engaging resident life is what we strive for at Redstone. Morrison, our Dining Services partner, ensures that residents feel the same way when it comes to their meals. Chef Dan is Morrison’s Executive Chef. He travels to each Redstone campus to demonstrate his wildly delicious recipes. Some months Chef Dan picks the super food, a nutrient-rich in-season item, and makes a meal of it. For example, October’s super food proved to be apples from Schramm’s in which Chef Dan baked into a delicious Autumn Apple Chicken. November’s spotlight was Mediterranean Shrimp and December showed Honey Mustard Walnut Crusted Salmon. Seafood dishes also seem to be a popular item amongst the resident cooking demos, so he’s always sure to occasionally feature those at well! These cooking demos started in 2019 as a way to teach new recipes to Independent Living residents on our Redstone campuses. Chef Dan enjoys his time preparing dishes in the back of the house, but he relishes in interacting with and teaching the residents new cooking skills that they can replicate on their own. The cooking demos occur on a monthly basis as Chef Dan illustrates favorable recipes for residents to recreate. Residents even get to sample the dish at the end. Chef Dan and his team also feature an Heirloom presentation which reproduces a resident’s favorite recipe from their own collection. Stay tuned to see what else the Morrison  team is cooking up! 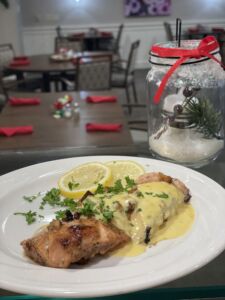 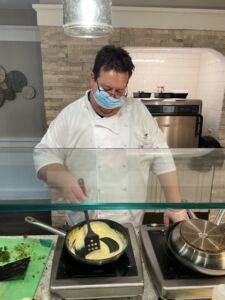 “I enjoy when a good meal comes together.” -Chef Dan